I had the pleasure of attending one of the most long running and reputable business networking groups as The Little General’s visitor yesterday. It truly was an engaging community of business owners who are as interested in other people’s businesses as much as they are their own.

There were some characters in the group who had developed their own sort of catch phrase they called out intermittently/sproadically. There were others who were still finding their way with public speaking, a skill that is definitely developed from being part of a group such as this. Indeed, I was the first visitor called upon to introduce myself to the room which consisted of two longgggg tables – around 60 odd people. 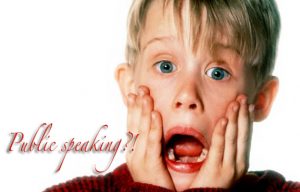 My tips to anyone who shies away from public speaking, whether to strangers, colleagues or classmates:

I hope next time you have to speak, you can have some fun with it – remember to relax, everyone has short attention spans these days and a percentage of the audience will likely be on their phones and not paying full attention. Take advantage of any opportunity to finesse your vocals!